What to Make of the Xinjiang Riots 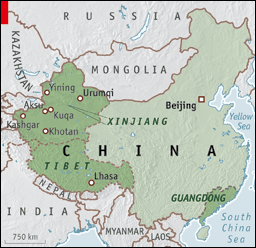 A week into the crisis in Western China it appears the PRC government is knee deep in the most significant social upheaval it has faced since Tiananmen Square twenty years ago.

I was able to get a quick grounding in the Uighurs and the region's contentious relationship with China via the Council on Foreign Relations website.

As in Tibet, the underlying issue in Xinjiang appears to be the systemic immigration of Han Chinese people, culture and control into the area. From all accounts the Han population has grown from 5% in 1949, when China got serious about its claim to the former East Turkestan, to over 40% today. Add in a heaping of scaled repression of Islamic traditions in the majority Muslim area and you have trouble waiting to happen.

The violence in Ürümqi is far from a unique occurrence. The bubbling cauldron of ethnic, religious, and economic strife in China, as addressed in Rob Gifford's wonderful narrative China Road, is one of the key challenges China faces on its race to being a superpower.

You can see China's take on the sitiuation in the the Global Times. Uighur leader Rebiya Kadeer offered her own perspective in Wednesday's Wal-Street Journal.
Posted by Ed at 7:17 PM
Email ThisBlogThis!Share to TwitterShare to FacebookShare to Pinterest