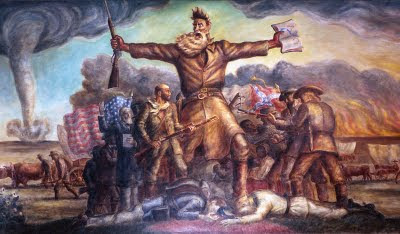 (Tragic Prelude by John Steuart Curry)
Today marks the 150th anniversary of the hanging of abolitionist John Brown. Brown's failed 1859 attack on the federal armory at Harpers Ferry was a major catalyst of the American Civil War. Brown's sealed his role as a martyr by proclaiming prior to his execution that, "I, John Brown, am now quite certain that the crimes of this guilty land will never be purged away but with blood."

Check out Tony Horwitz's piece The 9/11 of 1859 for some parallels between Antebellum terrorism and today's war on terror.
Posted by Ed at 9:26 AM
Email ThisBlogThis!Share to TwitterShare to FacebookShare to Pinterest